Image from page 43 of “An introduction to geography, ancient modern, and sacred, with an outline of ancient history” (1848) 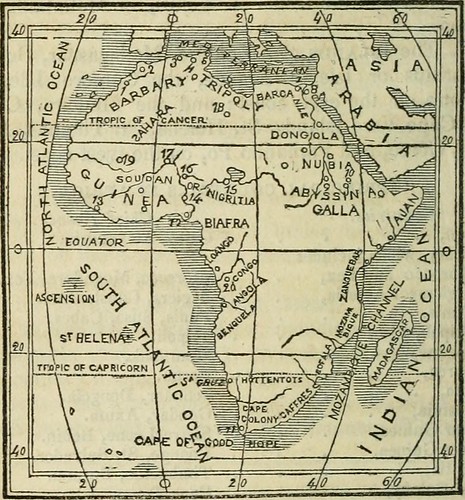 Text Appearing After Image:
KEFERENCES TO THE MAP OF AFRICA. Alexandria, 7 Cape Town, Algiers, . 3 Constantina, Benin, 12 Fez, Benoum, . 19 Gondar, . Boriiou, . 15 Morocco, . Boussa, . 14 Mourzouk, Cairo, . 8 Sackatco, . 11 St. Salvador, 11 4 Sennaar, . 9 2 Sierra Leone, 13 10 Suez (under) 8 1 Timbuctoo, 17 18 Tripoli, . 6 16 Tunis, 5 INTRODtrCTION TO GEOGRAPHY. 33 AMERICA. America, or the New World, was discovered in theyear 1492 by Christopher Columbus, a native of Genoa.It is distinguished from all the other great divisions of theglobe by the size and grandeur of its mountains, lakes,and rivers. America is bounded on the north by the Arctic Ocean ;on the south by the Antarctic Ocean ; on the east bythe Atlantic ; and. the west by the Pacific Ocean. It isdivided by the Gulf of Mexico and the Caribbean Seainto two vast peninsulas—one of which is called North,and the other South, America. North and South Ameri-ca are united by the Isthmus of Darien, or Panama,which in one part is only twenty-eight miles across