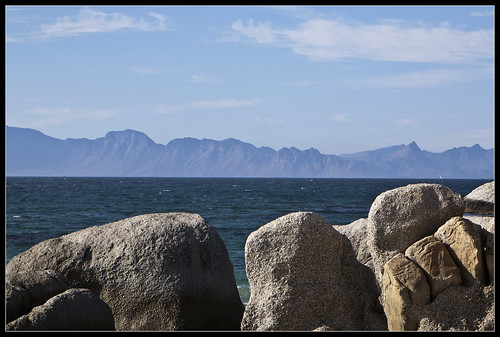 Boulders Beach is a sheltered beach made up of inlets between granite boulders, from which the name originated. It is located in the Cape Peninsula, near Simon’s Town towards Cape Point, near Cape Town in the Western Cape province of South Africa. It is also commonly known as Boulders Bay.

It is a popular tourist stop because of a colony of African Penguins which settled there in 1982. Boulders Beach forms part of the Table Mountain National Park.

Although set in the midst of a residential area, it is one of the few sites where this vulnerable bird (Spheniscus demersus) can be observed at close range, wandering freely in a protected natural environment.

From just two breeding pairs in 1982, the penguin colony has grown to about 3,000 in recent years. This is partly due to the reduction in commercial pelagic trawling in False Bay, which has increased the supply of pilchards and anchovy, which form part of the penguins’ diet.

Bordered mainly by indigenous bush above the high-water mark on the one side, and the clear water of False Bay on the other, the area comprises a number of small sheltered bays, partially enclosed by granite boulders that are 540 million years old.

The most popular recreational spot is Boulders Beach, but the penguins are best viewed from Foxy Beach, where newly-constructed boardwalks take visitors to within a few meters of the birds.

It is also a popular swimming beach, although humans are restricted to beaches adjacent to the penguin colony.