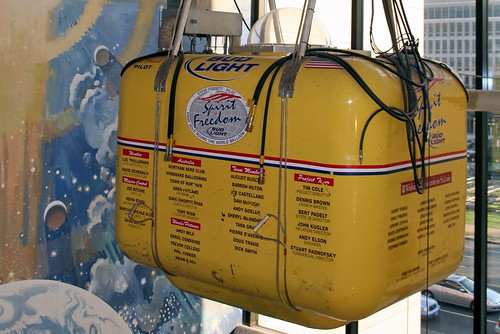 Living in a space the size of a closet for over two weeks was not easy. For much of the flight Fossett cruised at over 8,000 meters (26,240 feet) and breathed oxygen from a liquid oxygen system. The gondola was equipped with a bench and a sleeping bag. Fossett averaged three hours of sleep a day, usually in the form of cat naps lasting 45 minutes or less. He ate military rations called MREs ("meals ready to eat"). The MRE’s were heated with chemical heat packs, which were activated by adding water.

The flight was Fossett’s sixth solo attempt since 1996 to achieve this extraordinarily difficult goal. On one of those flights, in August, 1998, he plunged 8900 meters (29,192 feet) into the Coral Sea when his balloon ruptured in a thunderstorm. He was rescued after 23 hours in a life raft.
In finally achieving his goal, Steve Fossett demonstrated perseverance, determination, courage, and great skill in the air. He expressed the hope that his success would inspire others to "try and achieve something important to them."

Quick Cape Town Fact: Nelson Mandela made his first public speech since his imprisonment, from the balcony of Cape Town City Hall hours after being released on 11 February 1990.

Sharks’ coach attributes win to defensive pressure
Next Post: How do we prepare for the disruption of jobs related to IoT?