castles made of sand melt into the sea 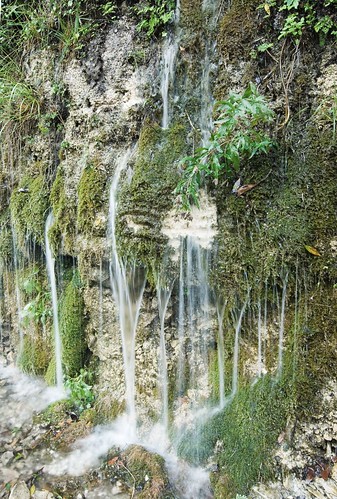 I cracked open the tent to see a solid grey sky. My tent was soaked, inside and out, groundsheet to fly. It oozed squdgily as I folded it into the back of the car. The coffee was bad, too. Bleh. But by the time I was on the road the cloud had broken up and there were wide expanses of blue, which then promptly clagged up as I drove off. It threatened to rain for much of the morning, but never quite got up the energy.

During the day it occurred to me once again that it is a Bad Idea to buy Roquefort when camping. Penicillium roquefortii has its strong points, sure, but its sweet aroma leaves something to be desired as a constant companion. Maybe I’d dripped it somewhere other than my jeans.

From Vega I drove south-west to the Mirador del Fito, on a mountain said to be “the highest nearest the sea in Europe”. That statistic exercised me for a while, as I contemplated fractals and angles and the difficulty of determining where the sea begins. For the record, Fito’s 1159m amsl and the peak is about 8km from the coast. Ben Nevis? Etna? Olympus?

Anyway, it was well worth the trip. I found myself on a ridge, shared with some goats, from which the world sprawled at my feet. As I was leaving, the shepherd arrived, and climbed up the wrong flank. I heard him calling “iii-oh!” on a falling half-note, a piercing cry that echoed under the grey hanging sky. His goats tinkled gently on the other side of the ridge.

Canegas de Ornís looks interesting, but you have to get there earlier than me if you want to park. But what comes later compensates any frustration at not finding a way to get at all that good coffee. The road plunges south into a chasm to the west of the Picos de Europa. The gorge is so deep and steep-sided that the GPS threw up its little hands in horror. For 20 km I flew blind, with “lost satellite reception” its only message. That’s how much of us feel for most of our lives, I guess.

Well worth the trip, yes, without a doubt. If ever you’re in Spain….

The heart of the Picos de Europa is only accessible on foot. There are one or two roads that dead-end somewhere in the massif, but despite them it keeps its secrets, like much of the highlands of Scotland, only more so. But it attracts tourists, too. Posada de Valedeón is a Mecca, and guess what? Nowhere to park. Everybody’s a tourist on Saturday.

After Poseda the road gets seriously interesting, with some hairy bits. That’s really my kind of road, and if I were on a motorbike I’d be in heaven. I enjoyed the road from Portilla de la Reina a little less – more traffic – but it’s still spectacular.

I headed back to the coast to camp. My first try was at San Vicente de la Barquers, which turned out to be a perfectly detestable tourist mill. My agoraphobia distended to barrage balloon dimensions, and I turned tail and fled, hoping that Comillas would be better. On the way, I ran into a traffic jam on the beach, with a cop directing traffic and blowing a whistle. Jeez. I guessed that all the coast near Santander would be like that, so I aimed for Isla way over to the east on the other side of the city. It turned out to be a zoo – wall-to-wall camping cars and caravans and a damn great funfair with all the oompah-oompah frills. Just the sort of thing that appeals to me.

So I headed back inland, to near Ramales de la Victoria, where I finally ran out of steam.

Quick Cape Town Fact: The Victoria & Alfred Waterfront in Cape Town is the most-visited destination in South Africa – ahead of Table Mountain.