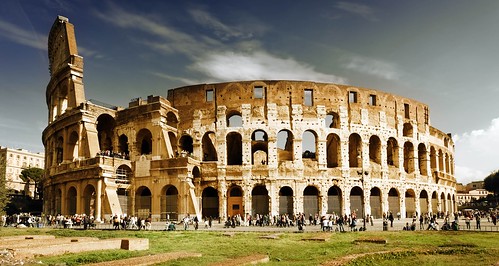 The Colosseum or Coliseum, also known as the Flavian Amphitheatre ( Italian: Anfiteatro Flavio or Colosseo) is an elliptical amphitheater in the center of the city of Rome, Italy. Built of concrete and stone, it is the largest amphitheater in the world, and is considered one of the greatest works of architecture and engineering.

The Colosseum is situated just east of the Roman Forum. Construction began under the emperor Vespasian in 72 AD, and was completed in 80 AD under his successor and heir Titus. Further modifications were made during the reign of Domitian (81–96). These three emperors are known as the Flavian dynasty, and the amphitheatre was named in Latin for its association with their family name (Flavius).

The Colosseum could hold, it is estimated, between 50,000 and 80,000 spectators, and was used for gladiatorial contests and public spectacles such as mock sea battles, animal hunts, executions, re-enactments of famous battles, and dramas based on Classical mythology. The building ceased to be used for entertainment in the early medieval era. It was later reused for such purposes as housing, workshops, quarters for a religious order, a fortress, a quarry, and a Christian shrine.

Although in the 21st century it stays partially ruined because of damage caused by devastating earthquakes and stone-robbers, the Colosseum is an iconic symbol of Imperial Rome. It is one of Rome’s most popular tourist attractions and has close connections with the Roman Catholic Church, as each Good Friday the Pope leads a torchlit "Way of the Cross" procession that starts in the area around the Colosseum.

In 2007 the complex was included among the New 7 Wonders of the World, following a competition organized by New Open World Corporation (NOWC).

The Colosseum is also depicted on the Italian version of the five-cent euro coin.

The Colosseum’s original Latin name was Amphitheatrum Flavium, often anglicized as Flavian Amphitheater. The building was constructed by emperors of the Flavian dynasty, following the reign of Nero. This name is still used in modern English, but generally the structure is better known as the Colosseum. In antiquity, Romans may have referred to the Colosseum by the unofficial name Amphitheatrum Caesareum (with Caesareum an adjective pertaining to the title Caesar), but this name may have been strictly poetic as it was not exclusive to the Colosseum; Vespasian and Titus, builders of the Colosseum, also constructed an amphitheater of the same name in Puteoli (modern Pozzuoli)

Construction of the Colosseum began under the rule of the Emperor Vespasian in around 70–72 AD, funded by the spoils taken from the Jewish Temple after the Siege of Jerusalem. The site chosen was a flat area on the floor of a low valley between the Caelian, Esquiline and Palatine Hills, through which a canalised stream ran. By the 2nd century BC the area was densely inhabited. It was devastated by the Great Fire of Rome in AD 64, following which Nero seized much of the area to add to his personal domain. He built the grandiose Domus Aurea on the site, in front of which he created an artificial lake surrounded by pavilions, gardens and porticoes. The existing Aqua Claudia aqueduct was extended to supply water to the area and the gigantic bronze Colossus of Nero was set up nearby at the entrance to the Domus Aurea.

During the 16th and 17th century, Church officials sought a productive role for the Colosseum. Pope Sixtus V (1585–1590) planned to turn the building into a wool factory to provide employment for Rome’s prostitutes, though this proposal fell through with his premature death.[19] In 1671 Cardinal Altieri authorized its use for bullfights; a public outcry caused the idea to be hastily abandoned.

According to the Codex-Calendar of 354, the Colosseum could accommodate 87,000 people, although modern estimates put the figure at around 50,000. They were seated in a tiered arrangement that reflected the rigidly stratified nature of Roman society. Special boxes were provided at the north and south ends respectively for the Emperor and the Vestal Virgins, providing the best views of the arena. Flanking them at the same level was a broad platform or podium for the senatorial class, who were allowed to bring their own chairs. The names of some 5th century senators can still be seen carved into the stonework, presumably reserving areas for their use.

The Colosseum was used to host gladiatorial shows as well as a variety of other events. The shows, called munera, were always given by private individuals rather than the state. They had a strong religious element but were also demonstrations of power and family prestige, and were immensely popular with the population. Another popular type of show was the animal hunt, or venatio. This utilized a great variety of wild beasts, mainly imported from Africa and the Middle East, and included creatures such as rhinoceros, hippopotamuses, elephants, giraffes, aurochs, wisents, Barbary lions, panthers, leopards, bears, Caspian tigers, crocodiles and ostriches. Battles and hunts were often staged amid elaborate sets with movable trees and buildings. Such events were occasionally on a huge scale; Trajan is said to have celebrated his victories in Dacia in 107 with contests involving 11,000 animals and 10,000 gladiators over the course of 123 days.

The Colosseum today is now a major tourist attraction in Rome with thousands of tourists each year paying to view the interior arena, though entrance for citizens of the European Union (EU) is partially subsidised, and entrance is free for EU citizens under eighteen or over sixty-five years of age. There is now a museum dedicated to Eros located in the upper floor of the outer wall of the building. Part of the arena floor has been re-floored. Beneath the Colosseum, a network of subterranean passageways once used to transport wild animals and gladiators to the arena opened to the public in summer 2010.