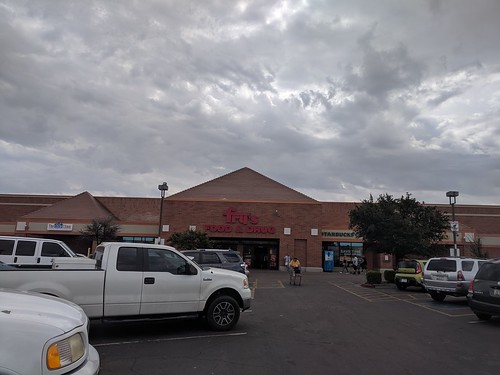 For 28 years as of this week, three pyramids have loomed atop a grocery store at the corner of Rural Road and Southern Avenue. It’s a busy intersection.

But step back 30 years earlier, and this site would have been the talk of the town in a different way. This is one of the most controversial grocery stores in Tempe history, with dueling petition drives; frustrated residents; and protests at the opening.

To start, we have to talk about what was here. Rural Road is named for the Rural School, which formed the core of the Tempe Elementary School District. Falling enrollment prompted the district to close the Rural School in 1983, and while a few temporary educational tenants used the campus, it was clear that commercial users coveted it.

One of them was Smith’s Food and Drug. The Salt Lake City grocer had debuted in Arizona on July 15, 1987, when it opened a store in Flagstaff. (Later, Cottonwood got a store as well.) That November, it crashed Tucson. The Valley, however, would have to wait two more years. With plans to open eight supermarkets in the metro area, it faced challenges. One was Smitty’s, which asked Smith’s not to use its name in Phoenix (to avoid confusion) and wound up getting sued as a result, though Smith’s won.

with Tempe and Scottsdale announced for summer 1990. (The starred locations were the first: November 1, 1989.) All six are still open — and they still have Wells Fargo banks in them (more on that later)!

While that was going on, however, Smith’s and the Tempe Elementary School District were up against a neighborhood battle. TESD desired to enter into a 50-year land lease with Smith’s to build a supermarket. Residents did not want Southern and Rural to become a busy intersection (too bad—it also has a Walmart) and thought that the site, at the same intersection as Tempe’s public library and history museum, should have a public use. While petitioners backed down, the result was a full field of Tempe City Council hopefuls in 1990 and even protests when the store finally opened August 7, 1991.

Smith’s ultimately joined forces with Smitty’s several years later. Smitty’s had operated since the 1970s one mile to the west, at Southern and Mill. The tandem operation retained both banners, though. A series of acquisitions in the mid/late 1990s united Smith’s and Smitty’s with Fred Meyer, and then with Kroger. Kroger made the decision to banner all stores in metropolitan Arizona and most of the rest of the state as Fry’s, though in four Mohave County stores (Kingman, Lake Havasu City, Bullhead City and Fort Mohave), Smith’s is still the banner of choice owing to the presence of Smith’s in Las Vegas.