Image from page 44 of “Geography and history of the British colonies : to which are added a sketch of the various Indian tribes of British America, and brief biographical notices of eminent persons connected with its history” (1860) 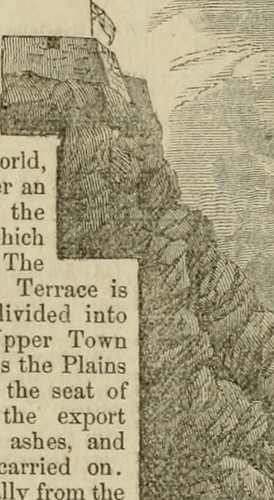 Text Appearing Before Image:
twenty Churches, two Colleges, and a Normal School. The city is well supplied with water and gas. There are also monuments to Generals Wolfe and Montcalm. The population is now about 45,000. 40. The Counties adjoining Quebec are wellwatered. They are the oldest and best settled coun- ^^e citadel, cape viamoth).ties in Lower Canada. The Island of Antieosti is 135 miles long and thirty-six wide.It is an important fishing station. It has several light-houses, and depots to aid ship-wrecked mariners. Tadoussac, at the mouth of the Saguenay river, is a principal stationof the Hudsons Bay Company. The Island of Orleans, near Quebec, is 20 miles long,by 6 wide. It is fertile and well wooded. The ancient Huron Indian village of Lorette,the celebrated Falls of Montmorency, and the Beauport Lunatic Asylum, are near Quebec. JExm-cises—For what is Quebec so famous ? Describe the city. Give the adjoining counties.What is said of Antieosti, the Saguenay, the island of Orleans, and other places ?