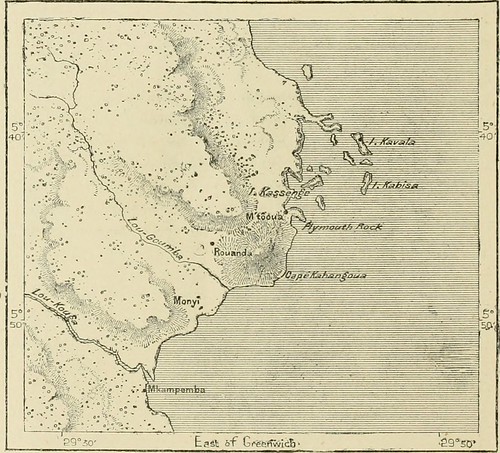 Text Appearing Before Image:
H.r ..1by a framework of iron wire and decked with shells, gl..s.s beads and metal WIUThey wear ganuents woven fron. the raphia fibre, to which ,bc b.-.U-r chp. »ddaprons of monkey or leopard skins. U-Uuha is one of the most .ndus.nal ceu.r.-s 460 WEST APEICA. in Africa, producing potteries, mats, cooperage, wicker-work, arms, implementsiron and copper ornaments. Ruanda, the capital, situated in a plain to the northof the Lu-Kuga, contains at least four hundred huts disposed in regular widestreets, which are carefully scavangered. Stakes erected at intervals and surmountedby two-headed hiiman effigies remind the people to look both to the past andfuture, to honour their forefathers tiitelar deities of the place, and at the same timelove their children, future defenders of the nation. Since 1885 a European village has stood on the islet of Kmala near a littleinsular group fringing the coast north of Cape Kahangwa. The English mission- Fig. 232.—Kavala Archipelago. Scnlo I : 150,000.

Text Appearing After Image:
, 6 Miles. aries have made choice of this station on account of its salubrity and the excellentharbour developed between the island and the mainland. Kavala is at present theEuropean naval station and dockyard on Tanganyika, and also carries on an activetrade with the natives. The Congo from Lake Langhi to the U-Banghi Confluence. The Upper Congo basin proper, below the Lua-Laba, Lua-Pula, and Lu-Kugaconfluence, described by Livingstone as a land of supreme beauty, is occupied THE MIDDLK COiNMiO. ^^, chiefly by tLo Vua-Ma-Nyema, or Ivit.-r.s of Flesh, who were till recently mu..hdreaded by their western neighbours owing to their pronounced cannibaliHin. Yet such repulsive tastes do not prevent the Ma-Nycma from suriJUKKJng moHtof the surrounding peoples in kindliness and even gentle dispositions. They arcalso noted for their physical beauty, the women especially being sought after bythe Arabs for their graceful carriage and regular features. The men wear antoloixtskins, while many of

Quick Cape Town Fact: It was the Portuguese explorer Bartolomeu Dias who became the first European to set eyes on what is now Cape Town after he rounded the Cape by ship in the late 1400s.