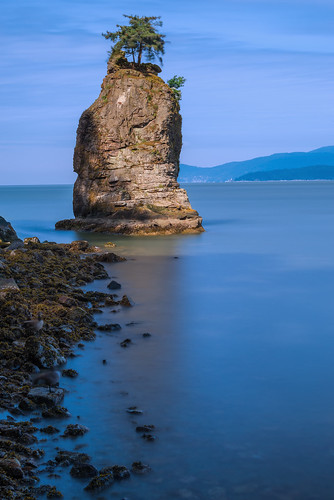 Siwash Rock, also known by its Squamish name Skalsh or Slhx̱i7lsh, is a famous rock outcropping in Vancouver, British Columbia, Canada’s Stanley Park. A legend among the Indigenous Squamish people surrounds the rock. It is between 15 and 18 metres tall (50–60 feet). It became known to mariners as Nine Pin Rock for its vague resemblance to a bowling pin at one point too. [source: en.wikipedia.org/wiki/Siwash_Rock]

Siwash Rock is one of the most iconic of Stanley Park’s father figures. Located at a sharp bend between 3rd Beach, Prospect Point and the Lions Gate Bridge, Siwash is a rocky outcrop with a tough, twisted handful of Douglas Firs sprouting on top. Long before Lord Stanley gazed upon the lattice of rocky shores, sandy beaches and giant cedars that make up our beloved park, Siwash Rock stood ‘like a noble-spirited, upright warrior” according to E. Pauline Johnson (aka Tekahionwake), the author of Legends of Vancouver.
Whether you choose to salute Siwash Rock as an interesting, coastal formation or a monument dedicated to a selfless father figure, it’s still one of Stanley Park’s most photographed and revered attractions. The geological explanation for origins of this Vancouver icon says that Siwash Rock came to be thanks to a volcanic dike forming in the sandstone and mudstone that form the park’s foundation. Burning hot magma was forced upwards through a crack in the Earth’s surface creating an abstract-looking basalt stack. Tougher than the sandstone cliffs nearby, Siwash Rock is the only sea stack for kilometers around. [source: www.insidevancouver.ca/2013/08/22/history-of-siwash-rock/]

Stanley Park is a 405-hectare (1,001-acre) public park that borders the downtown of Vancouver in British Columbia, Canada and is almost entirely surrounded by waters of Vancouver Harbour and English Bay. The park has a long history and was one of the first areas to be explored in the city. The land was originally used by indigenous peoples for thousands of years before British Columbia was colonized by the British during the 1858 Fraser Canyon Gold Rush. For many years after colonization, the future park with its abundant resources would also be home to non-aboriginal settlers. The land was later turned into Vancouver’s first park when the city incorporated in 1886. It was named after Lord Stanley, 16th Earl of Derby, a British politician who had recently been appointed governor general. Unlike other large urban parks, Stanley Park is not the creation of a landscape architect, but rather the evolution of a forest and urban space over many years. Most of the man-made structures we see today were built between 1911 and 1937 under the influence of then superintendent W.S. Rawlings. Additional attractions, such as a polar bear exhibit, aquarium, and miniature train, were added in the post-war period. Much of the park remains as densely forested as it was in the late 1800s, with about a half million trees, some of which stand as tall as 76 meters (249 ft) and are up to hundreds of years old. Thousands of trees were lost (and many replanted) after three major windstorms that took place in the past 100 years, the last in 2006. Significant effort was put into constructing the near-century-old Vancouver Seawall, which can draw thousands of residents and visitors to the park every day. The park also features forest trails, beaches, lakes, children’s play areas, and the Vancouver Aquarium, among many other attractions.
On June 18, 2014 Stanley Park was named "top park in the entire world" by TripAdvisor.
[source: en.wikipedia.org/wiki/Stanley_Park]

Vancouver, officially the City of Vancouver, is a coastal seaport city on the mainland of British Columbia, Canada, and the most populous city in the province. The 2011 census recorded 603,502 people in the city, making it the eighth largest Canadian municipality. The Greater Vancouver area of around 2.4 million inhabitants is the third most populous metropolitan area in the country. Vancouver is one of the most ethnically and linguistically diverse cities in Canada; 52% of its residents have a first language other than English. Vancouver is classed as a Beta global city. The City of Vancouver encompasses a land area of about 114 square km, giving it a population density of about 5,249 people per square km (13,590 per square mi). Vancouver is the most densely populated Canadian municipality with over 250,000 residents, and the fourth most densely populated such city in North America behind New York City, San Francisco, and Mexico City. The original settlement, named Gastown, grew up on clearcuts on the west edge of the Hastings Mill logging sawmill’s property, where a makeshift tavern had been set up on a plank between two stumps and the proprietor, Gassy Jack, persuaded the curious mill-workers to build him a tavern, on 1 July 1867. From that first enterprise, other stores and some hotels quickly appeared along the waterfront to the west. Gastown became formally laid out as a registered townsite dubbed Granville, B.I. ("B.I" standing for "Burrard Inlet"). As part of the land and political deal whereby the area of the townsite was made the railhead of the CPR, it was renamed "Vancouver" and incorporated shortly thereafter as a city, in 1886. By 1887, the transcontinental railway was extended to the city to take advantage of its large natural seaport, which soon became a vital link in a trade route between the Orient, Eastern Canada, and Europe. As of 2014, Port Metro Vancouver is the third largest port by tonnage in the Americas (displacing New York), 27th in the world, the busiest and largest in Canada, and the most diversified port in North America. While forestry remains its largest industry, Vancouver is well known as an urban centre surrounded by nature, making tourism its second-largest industry. Major film production studios in Vancouver and Burnaby have turned Greater Vancouver and nearby areas into one of the largest film production centres in North America, earning it the film industry nickname, Hollywood North. [source: en.wikipedia.org/wiki/Vancouver]

R1.2bn set aside to address effects of COVID-19
Next Post: #StopTheSpread