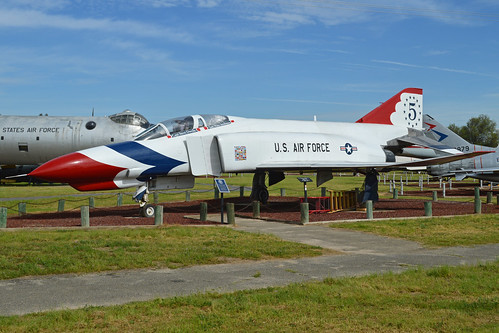 The following info is from the Castle Air Museum website:-

“The aircraft on display at Castle Air Museum is an F-4E built in 1966. It started its career in the 33rd Tactical Fighter Wing at Eglin AFB, Florida in 1967. In March of 1969 it began its transformation into an Air Force Thunderbird to be assigned to the Air Demonstration Squadron at Nellis AFB, Nevada.
It served as an Air Force Thunderbird for five outstanding years where it earned the nick name "Super-fine 289", finally moving back into Tactical Fighter Wing duty in 1974. After several stateside duty assignments, this aircraft was eventually processed into storage in March of 1991 at Davis-Monthan AFB, Arizona.
In January of 1995, the Castle Air Museum received permission from the Air Force to bring this F-4 to our museum for restoration. After hundreds of volunteer man-hours of re-assembly, and a whole new coat of paint, our newest addition to the museum was ready for a formal dedication on February 10, 1996.
We are very proud of this aircraft. Restored to its former glory representing U.S. Air Force Thunderbird number 5, 66-0289 joins only four other F-4 Thunderbirds that have been restored.”

Quick Cape Town Fact: The Table Mountain Aerial Cableway is nearly a century old? Before then, the only way up the mountain was by foot and only the most adventurous—or foolhardy—had been to its summit. On 4 October 1929, after two years of difficult and dangerous work, the first Cable Car chugged its way to the top filled with excited and probably very nervous visitors. It’s been upgraded a number of times since, and today the trip to the top is smooth sailing.