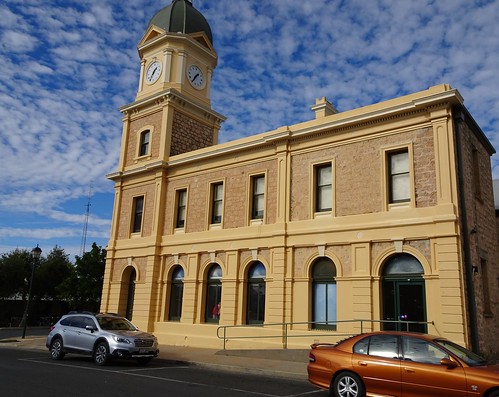 Moonta.
The original occupants of the land around Moonta were the Narrunga people who lived across Yorke Peninsula. Once white settlements appeared in the Copper Triangle towns a group of interdenominational zealots formed a committee in 1867 to set up a mission for Aboriginal people. A year later the group was granted 600 acres of land by the government for the establishment of Point Pearce Aboriginal Mission near Port Victoria. The first superintendent of the Mission was the Reverend Julius Kuhn. White settlement really began in the district in 1861 when Walter Watson Hughes of the Wallaroo run began mining operations at Wallaroo Mines. Patrick Ryan, one of his shepherds had discovered copper ore in a wombat burrow the year before. At that time in the 1860s copper was binging as much as £87 per ton so Walter Hughes became a wealthy man quickly. He developed the mine with capital from Elder Smith and Company and his fellow company directors. The first miners in the Copper Triangle were Cornish miners moving down from Burra. The majority of settlers though came directly as sponsored immigrants from Cornwall. In 1865 some 43% of all immigrants to SA came from Cornwall. This direct migration continued especially after the closure of some big mines in Cornwall in 1866. Mining began at Moonta about the same time as mining at Wallaroo Mines (1861.) Hughes was the major investor in both the Wallaroo Mining Company and the Moonta Mining Company. The smelters for the district were located at Wallaroo. The Moonta Mines were the richest in the whole district and in its first year of operations the Moonta Mines made a profit of £101,000.

One of the first shafts sunk at Moonta was the Ryan shaft, after Watson’s shepherd. From 1864 the mine superintendent was Henry Hancock and consequently the second shaft was named the Hancock shaft. Hancock was the one who made sure the mines operated efficiently. His “reign” lasted until 1898. He also had advanced social welfare ideas for the times and he established a school of mines for the boys and a library for the miners. By 1876 under Hancock’s expert management the mine had produced £1,000,000 in dividends. Upon his retirement in 1898 Hancock’s son took over management of the Moonta mines which had been amalgamated with the Wallaroo mines into one company in 1890. Mining operations at Moonta were complex and some shafts exceeded 700 metres in depth. This created problems with water (and heat for the miners) so large pump houses were required such as the Hughes Engine House which still stands, albeit in ruins. The Moonta mine lasted for over sixty years and Cornish miners influenced the style of buildings in the town and the design of pump and engines houses as they were all the same as those in Cornwall. Some engines were made in Cornish foundries but others were made by James Martin‘s large foundry in Gawler. After World War One the price of copper fell dramatically and the mines became financially unviable and closed in 1923. Their heyday had been between 1900 and 1910 when much of the mining equipment had been replaced and modernised and prices were good, but a disastrous underground fire in 1904 in Taylor’s shaft began a slow decline in returns for the mine investors.

The Copper Triangle towns of Moonta-Wallaroo- Kadina had 12,000 people by 1890, representing about 10% of Adelaide’s population which was only 130,000. Consequently government services for the area were given priority and by 1878 the Triangle had a daily rail connecting service to Adelaide via Port Wakefield, Balaklava and Hamley Bridge. Apart from their mining skills the Cornish brought with them their religious faith hence the numerous Methodist chapels and churches in the area. All three branches of Methodism were well represented- Bible Christian Methodists, Primitive Methodists and Wesleyan Methodists. The 1891 census showed that 80% of the residents of the Moonta district were Methodists. Not surprisingly the Moonta Methodist Circuit (like a synod) had more church members than the big circuits in Adelaide such as Pirie Street, Norwood or Kent Town. The old Methodist Church at Moonta Mines was built in 1865 and with its gallery it can hold 1,250 worshippers. It seldom gets 50 worshippers these days! At one stage there were 14 Methodist churches in Moonta with a further 10 in Wallaroo/Kadina. As the Cornish used to say “Methodist churches are as common as currents in a cake.” The pulpits of the churches provided good training ground for public speaking as lay preachers were often used in these churches. One such trainee was John Verran who was Premier of SA between 1910-12. He once remarked “he was a MP because he was a PM” i.e Primitive Methodist!