Serviceton. In the railway station museum a great map of the Victorian and southern New South Wales railway network. 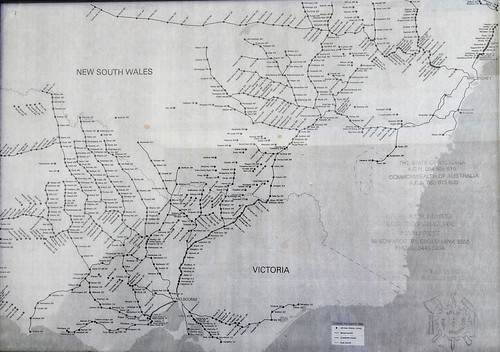 Serviceton.
Planning for the first intercolonial railway line in Australia began in the early 1870s when SA started work on the first bridge across the Murray River at what was later named Murray Bridge but was then known as Edwards Crossing. The railway through the Adelaide Hills was a major feat of engineering with its sharp gradients, tunnels and viaducts. It reached Murray Bridge in 1883 and Bordertown near the SA/Victorian border in 1886. But there was a zone of disputed territory between the two states which had started back in the 1864 when it was discovered that the border was not surveyed where it should be. Victoria had usurped 700 square miles of what was rightfully South Australian territory. There was discussion about compensation but as governments changed agreements were ignored. This issue was not fully resolved until a decision of the High Court of Australia resolved the matter, erroneously, in favour of Victoria in 1914. Thus the border station for the intercolonial railway was settled in 1886 at Serviceton, a few miles into Victorian territory. The Chief Minister and Premier of SA (Sir) John Downer, one of the main writers of the Australia constitution, wrote to the Premier of Victoria suggesting that the new border railway town be named Downer after him. The Victorian Premier of the day wrote back and said that as the town was in Victoria it would be named Serviceton after himself. He was Sir James Service, Victorian Premier from 1883 to 1886. Ironically almost all the farmers of the Serviceton district, who arrived in 1877 or 1879 once the pastoral estates were opened up for farming, had come from South Australia to take up selector blocks there. Most had come from Bordertown, Naracoorte or other areas of the South East. They had not come from elsewhere in Victoria. Serviceton also had a strong to link SA through the train crews. South Australian Railways had their Crew Barracks in Serviceton – the only SAR crew barracks outside of the state of SA.

Serviceton was the border post where train crews and engines were changed between the Victorian Railways and South Australian Railways. An impressive Customs House/Railway station was commissioned 1887. The first train had left Adelaide for Melbourne on January 19th 1887. Costs were shared between the two states and the complex of 15 main rooms including a large refreshment room was completed in 1889. For two shillings and six pence in the middle of the night you could purchase soup followed by a roast of beef or lamb with vegetables from these refreshments rooms in the 1890s. A small town grew up around the railways/customs complex with shops, a bank, Post Office, billiard room, churches, a fire station and a school but nothing remains today, except for a few houses, a store and two churches. The first church in Serviceton was the Anglican Church which opened in 1929 but services had been held in the Serviceton Hall since 1921.The timber framed church was removed from the town after its closure in 1972. The Church of Christ operated in Serviceton in the Hall from 1931 to 1954 when a church was finally erected and it still remains standing and in use. By 1985 it had five members and was about to close and so it merged with the Uniting Church of Serviceton. A Methodist church opened in Serviceton in 1918 and was still operating in 1985 when it merged with the Church of Christ. There was also a Lutheran Church in Serviceton from 1927 until 1976 when it was closed and removed to Lucindale in the South East of SA. A transportable school opened in Serviceton in 1887 so that it could be moved if the disputed territory was returned to South Australia! In 1890 when this seemed less likely to the Victorians had a brick school constructed. It was poorly built and had bad cracks by 1901 which required major repairs about every ten years. The school officially closed in 1952. The area around Serviceton and to the south was good farming land and unlike SA Victoria moved into bulk handling of wheat very early. The concrete wheat silos at Serviceton were constructed in 1939. The first bulk handling of wheat happened in SA at Ardrossan in 1953.

In 1887 twenty railway workers cottages were constructed in the new town. Customs roles finished with the inauguration of the Commonwealth of Australia in January 1901. The refreshment rooms at the railway station closed in 1981 and the station finally closed as a manned station in 1986. The Overland train and freight trains pass through the station very day on their journeys between Adelaide and Melbourne but few ever stop. Because so many of the buildings in Serviceton were timber framed they have been removed or demolished and little of the early border town actually remain these days.

Quick Cape Town Fact: Back in the days the Castle of Good Hope used to be on the coast line, hence the name ‘Strand Street’ (‘strand’ means ‘beach’ in Dutch and Afrikaans). Land reclamation to create Foreshore and the current harbor caused the coastline to move to the west.