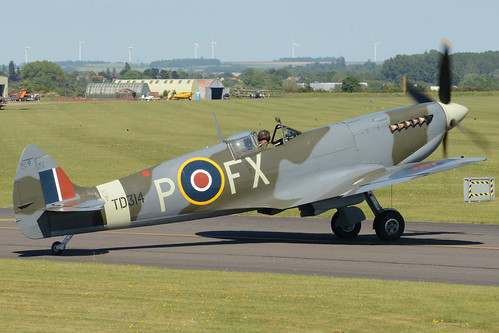 c/n CBAF.10492.
Seen taxiing out for an air-test, in the steady hands of John Romain, at the Imperial War Museum,
Duxford, Cambridgeshire, UK.
26th May 2017

The following info on the aircrafts history comes from globalaviationresource.com

“Manufactured at Castle Bromwich in 1944, TD314 initially joined No. 33 Maintenance Unit (MU) at RAF Lyneham on 2 April 1945; during operational service with the RAF, it would circulate through several units including No. 30 MU at RAF Sealand, No. 6 MU at RAF Brize Norton, No. 183 (Gold Coast) Squadron at RAF Chilbolton and No. 234 (Madras Presidency) Squadron at RAF Bentwaters until it was finally received by No. 29 MU at RAF High Ercall for disposal on 27 February 1946.
Eventually, TD314 was dispatched to No. 47 MU at RAF Sealand on 24 March 1948, where it became surplus to requirements and was crated up and shipped to Cape Town, South Africa, on 19 April 1948, arriving on 12 May for active duty with the South African Air Force. Following six years of military service in South Africa, the Spitfire was sold to the South African Metal and Machinery Company in 1954 for disposal. The fuselage and other parts were later recovered by Larry Barnett in Johannesburg between 1969 and 1972, before it was sold to Canadian owners in 1985. In 2009, Peter Monk acquired the aircraft for restoration by the Spitfire Company (Biggin Hill) Limited and it was registered to Keith Perkins in 2011, with work beginning the same year.”

Her first flight after restoration was at Biggin Hill on 7th December 2013 and she is now often operated on ‘Fly with a Spitfire’ flights, where you can fly in a Dragon Rapide in formation with the Spit.