A Cape Town University of the Western Cape tagged image from photographer – rocbolt as published on Flickr. 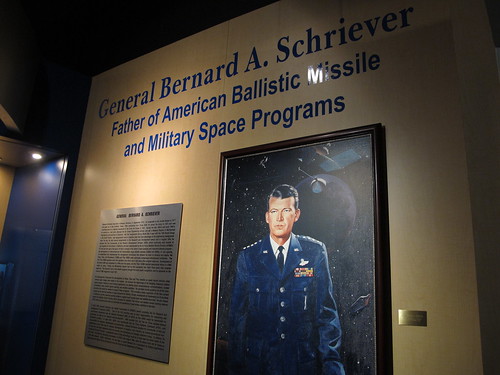 Considered the father of the military space and missile programs, General Bernard A. Schriever’s involvement in those countless programs are on display in the third room of the Exhibit Hall. The room is dedicated to the accomplishments of General Schriever, who was present at the dedication of the room.

General Schriever was born in Bremen, Germany, in September 1910. He emigrated to the United States in 1917, and grew up in San Antonio, Texas. After graduating from Texas A&M University, he joined the Army in 1931 and was commissioned as a Second Lieutenant in the Army Air Corps in 1933. During the late 1930’s and early 1940’s, he served as a test pilot, attended the Air Corps Engineering School, and got a Masters Degree in Mechanical Engineering (aeronautical) at Stanford. His first assignment during World War II was with the 19th Bomb Group in the South Pacific; later assignment were in logistics jobs that took advantage of his engineering background. After the war, he held several assignments in the Research and Development arena, and in August 1954, he became the first Commander of the Western Development Division (WDD) which eventually was located at Los Angeles Air Force Base in California, and later re-designated as the Air Force Ballistic Missile Division (AFBMD). For the next four and a half years, he was in charge of the nation’s most complex and important defense program — the development of intercontinental and intermediate range ballistic missiles (ICBMs and IRBMs). In that capacity, he established and implemented the management techniques that allowed his team to develop and deploy the Atlas, Titan, and Minuteman I ICBMs and Thor IRBM under extremely compressed development schedules. The first Thor IRBM squadron went into operation only three and a half years after program approval. Development of the Atlas ICBM was completed in a little over five years, and the Titan I ICBM reached operational status in a little under six years. Finally, the Minuteman missile had its first successful test flight three years after program approval. The General’s role in the missile program brought him wide public recognition, and he appears on the cover of TIME magazine in April 1957.

He subsequently influenced the development of Atlas, Titan and Thor missiles as space launch vehicles when various upper states were added to the rockets. He oversaw the beginning of the fledgling American military space program leading to such diverse applications as satellite photo reconnaissance, communication, nuclear surveillance, early missile launch warning, and weather satellites. He provided crucial guidance to all the then current missile launch and test facilities at Cape Canaveral Air Force Station, Florida, development of Vandenberg Air Force Base in California, and the required tracking ranges to support such missile tests and satellite launches. He also helped create the Satellite Control Facility which included the Satellite Test Annex and needed remote tracking stations (RTS) which communicated with and controlled the operations of most military satellites at that time.

In April 1959, General Schriever was named Commander of AFBMD’s parent command, the Air Research and Development Command (ARDC). One of his first priorities was to have responsibility for contracting and procurement transferred from Air Materiel Command (AMC) to ARDC so that ARDC would be responsible for production as well as for research and development. AMC resisted this, but the Air Force adopted General Schriever’s position. In April 1961, ARDC was transformed into Air Force Systems Command (AFSC), with responsibility for research, development, and production. General Schriever became the Commander of that new organization, and in that role, he oversaw development of weapons and ordnance for limited conventional war– an area that had been neglected while the country was developing its strategic deterrent forces. In addition, he conducted Project Forecast — a systematic look at what technology could do to help meet the future needs of the Air Force. The General remained commander of AFSC until August 1966, when he retired from the Air Force as a four-star general. Since retirement, he has been in great demand as a consultant to civilian organizations and had served without fee as an advisor to the Air Force and the Department of Defense.

General Schriever died 20 June 2005 of complications from pneumonia at his home in Washington, D.C.