Quick Cape Town Fact: Nelson Mandela made his first public speech since his imprisonment, from the balcony of Cape Town City Hall hours after being released on 11 February 1990.

Port Lincoln Eyre Peninsula. The old Mikkira sheep station homestead dating from 1842. It was once thatched over galvanised iron. 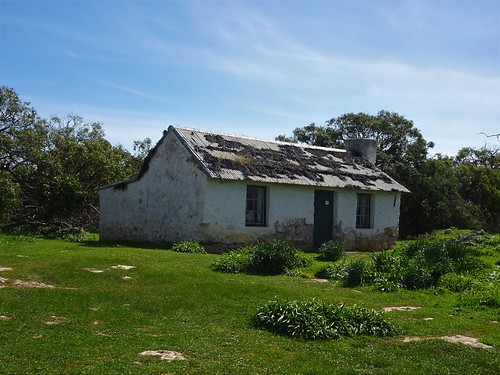 Whalers Way.
This is a spectacular coastal drive with sandy beaches, emerald seas, cliff tops, blow holes and wave cut platforms. The South Australian Company operated a whaling station here from 1837 to 1841 hence the name. Next to Whalers Way which is privately owned property is Lincoln National Park which we do not visit. As with Whalers Way Matthew Flinders charted this coast in 1802. Around the tip of Seaford Bay he hit Cape Catastrophe which he so named. The dangerous water here claimed the lives of two officers and six crew on 21 February 1802 when they were examining the coast in a small boat. Flinders was shaken by this loss of life and he named the cove nearby Memory Cove and six of the islands near here were named after the officers and crew – Thistle Island, Taylor Island, Grindall Island, Williams Island, Lewis Island, Hopkins Island, Little Island and Smith Island. Flinders went on to name Cape Donington after his birthplace village and Port Lincoln after his home country and Boston Island after the town nearest his birthplace.

Eyre Peninsula.
In the 2016 census the population was around 55,000 with 23,000 in Whyalla and 13,000 in Port Lincoln. Eyre Peninsula is the largest grain producing region of the state and almost all is wheat. On average it produces about 40% of the state crop. 95% of our wheat is exported. International ports are operational at Port Lincoln and Thevenard (Ceduna). Other industries are oyster farming, tuna fishing and aquaculture and mining. Apart from iron ore mining in the Middleback Ranges, jade and graphite are mined on the Peninsula. Exports are dominated by mining and grain production. Almost 5,000 people are employed in both mining and in farming across the Peninsula. Port Lincoln has around 409 mm of rainfall a year, Kimba has 318 mm, Ceduna has 303 mm and Cleve has 391 mm. Adelaide has 533 mm. There are no rivers, except for the Tod River, or fresh water lakes on Eyre Peninsula.