A Cape Town University of Cape Town tagged image from photographer – denisbin as published on Flickr.

David Unaipon Aboriginal memorial at Raukkan, South Australia. His inventions are on the note and the church at Raukkan. Point McLeay. 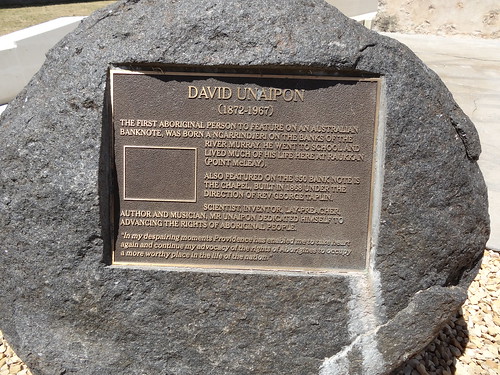 Memorial stone at Raukkan Aboriginal Community for noted Aborginal inventor , ministr, writer and philospher Daivd Unaipon who is depicted on the Australian note. Raukkan was Point McLeay Aboriginal Mission. It is near Meningie in South Australia.

The origin of the Ngarrindjeri Mission of the AFA goes back to the drive of George Taplin, the founding missionary, and the need for the mission because of destruction of the traditional fishing and hunting grounds of the Ngarrindjeri people. The Ngarrindjeri occupied the lands along the Coorong from Kingston, around the two lakes and up the Murray to where Murray Bridge now stands, and across the bottom of Fleurieu Peninsula to Cape Jervis. These lands were all areas of Special Surveys in 1839 and early white settlement. The close access to fresh water attracted pastoralists and where there were not Special Surveys the lands were granted to white pastoralists by annual and later 14 year leases. As one writer, Graham Jenkins, has claimed in his history of the lower lakes, the Ngarrindjeri were conquered by whites and then dispossessed of their lands and food sources. The Aboriginal Friends’ Association was formed in 1857 from various Protestant denominations but with a strong Anglican backing. They wanted to assist with the physical living conditions of Aboriginal people as well as introducing them to Christianity. Welfare was their primary aim. The believed Aboriginal people deserved more than blankets and meagre government food rations. The AFA called for reports and were told that 30 to 40 Aboriginal children in Goolwa from the Ngarrindjeri were in desperate need of schooling. Parliament offered a grant of £500 for the establishment of a school in the vicinity of Goolwa. In 1859 the new AFA committee agreed to appoint an agent to find the best location for the school. George Taplin, a school teacher of Goolwa, was appointed to this role of finding a suitable location and then to set up a mission and school. Taplin had been concerned about Aboriginal welfare for some years. He relished his new position. Taplin selected a spot at Point McLeay (McLeay was second in charge of the Charles Sturt expedition of 1830 along the Murray). To the Ngarrindjeri this spot was called Raukkan hence the name of the Aboriginal Community here today.

The leaseholder of land adjoining Raukkan was John Baker of Morialta. He objected to Taplin’s choice as an Aboriginal Mission there would be “prejudicial to his interests” as the government grant for the Mission was coming out of his leasehold of Narrung station. As a state politician he initiated the first Royal Commission by an SA government into the conditions and welfare of Aboriginal people. He had hoped to have Taplin and the AFA ousted from his land. But this was not the outcome of the Royal Commission which looked at issues across SA, not just around the lower lakes, and the Commission found no reason to relocate the Taplin Mission. In one sense Baker had one justifiable point- the Raukkan Mission had insufficient land to provide a satisfactory livelihood for the Aboriginal residents. They could fish the lakes and the Coorong, they could work on the pastoral properties of Poltalloch and Campbell Park, they could grow their own vegetables, but they had insufficient land to crop or to pasture sheep or cattle on in terms of income. The land at Raukkan might have provided for one family, not dozens. This lack of land and income was an ongoing problem with the Mission. But Baker’s other claims that Taplin only wanted the salary and was not interested in aboriginal welfare, that he was lazy, and that he bribed the Ngarrindjeri to attend church were all patently false.

Taplin set to work to establish a school at Raukkan, then some cottages for the Aboriginal people, as well as one for his own family, and the church, depicted our note which opened in 1869. Taplin learnt Ngarrindjeri language, recorded it, wrote many essays and published books on the Aborigines of South Australia. He died in 1879 when one of his sons took over as superintendent of the Mission. George Taplin was revered and respected by the Ngarrindjeri people. He tried to establish a commercial fishing operation for the Ngarrindjeri, he organised football and cricket matches with local white teams, he assisted with the employment of Aboriginal people on the nearby great stations, and the community ran a business washing wool for the Bowman brothers’ estates. The school was his first priority and the school room opened in 1860. Taplin is especially remembered for his Ngarrindjeri translations of books from the Bible which are unique in Australia. By the time Taplin died Raukkan had about 1,700 acres of land, the size of a normal farm. It began in 1860 with a lease from the government of just 750 acres. In 1878 the AFA got a leasehold block along the Coorong for sheep grazing, holidays and fishing. The Raukkan Mission under the guidance of the AFA and strong educationists like George Taplin produced three well known Aboriginal preachers and an outstanding writer, scientist and inventor, David Unaipon who is also depicted on our note. David (1872-1967) was born on the mission, died in Tailem Bend and was buried back in Raukkan. In 1909 he developed and patented a new form of shearing cutters. He was an internationally recognised expert in ballistics although he had no formal university education. He patented nine inventions including a centrifugal motor. He did research at the University of Adelaide although he was not employed there. He mainly got his income from preaching and writing.

The Raukkan Mission was taken over from the AFA in 1916 by the state government which then assumed full control. It was then known as Point McLeay Aboriginal Reserve and over the years it acquired some additional land but never sufficient for a good income for the Reserve. In 1974 the Raukkan lands were handed over to the Ngarrindjeri people and they changed the Reserve name to Raukkan Aboriginal Community in 1982. The town has memorial cairns to George Taplin, Captain Charles Sturt and David Unaipon. The old church has good stained glass windows and an interesting interior with no central church aisle which is most unusual. George Taplin’s cottage from the 1860s is now the Raukkan Gallery and museu

Quick Cape Town Fact: Table Mountain is 1,860 meter high and it is estimated that every month at least two couples get engaged on top of Table Mountain. 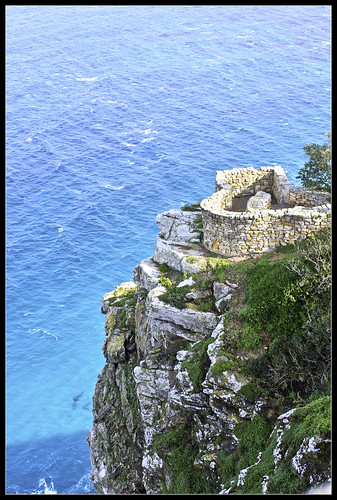 Cape Point is a promontory at the southeast corner of the Cape Peninsula, which is a mountainous and scenic landform that runs north-south for about thirty kilometres at the extreme southwestern tip of the African continent in the Republic of South Africa. Table Mountain and the city of Cape Town are close to the northern extremity of the same peninsula. The cape is located at 34°21′26″S 18°29′51″ECoordinates: 34°21′26″S 18°29′51″E, about 2.3 kilometres (1.4 mi) east and a little north of the Cape of Good Hope on the southwest corner.[1] Although these two rocky and beautiful capes are very well known, neither cape is actually the southernmost point in Africa; that is Cape Agulhas, approximately 150 kilometres (90 mi) to the east-southeast.

The Cape of Good Hope (Afrikaans: die Kaap van Goeie Hoop, Dutch: About this sound Kaap de Goede Hoop (help·info), Portuguese: Cabo da Boa Esperança) is a rocky headland on the Atlantic coast of the Cape Peninsula, South Africa. There is a misconception that the Cape of Good Hope is the southern tip of Africa, because it was once believed to be the dividing point between the Atlantic and Indian Oceans. In fact, the southernmost point is Cape Agulhas, about 150 kilometres (90 mi) to the east-southeast. The Atlantic and Indian oceans meet at the point where the warm-water Agulhas current meets the cold water Benguela current and turns back on itself – a point that fluctuates between Cape Agulhas and Cape Point, about one kilometre east of the Cape of Good Hope.

When following the western side of the African coastline from the equator, however, the Cape of Good Hope marks the point where a ship begins to travel more eastward than southward. Thus the first rounding of the cape in 1488 by Portuguese explorer Bartolomeu Dias was a milestone in the attempts by the Portuguese to establish direct trade relations with the Far East. Dias called the cape Cabo das Tormentas. "Cape of Tempests" was the original name of the "Cape of Good Hope". [2]

As one of the great capes of the South Atlantic Ocean, the Cape of Good Hope has been of special significance to sailors for many years and is widely referred to by them simply as "the Cape."[3] It is a waypoint on the clipper route followed by clipper ships to the Far East and Australia, and still followed by several offshore yacht races.

The term Cape of Good Hope is also used in three other ways:

It is a section of the Table Mountain National Park, within which the cape of the same name, as well as Cape Point, falls. Prior to its incorporation into the national park this section constituted the Cape Point Nature Reserve;[4] It was the name of the early Cape Colony established in 1652, in the vicinity of the Cape Peninsula.
Just prior to the formation of the Union of South Africa, the term referred to the entire region that in 1910 was to become the Cape of Good Hope Province (usually shortened to the Cape Province).

Path up to Cape Point 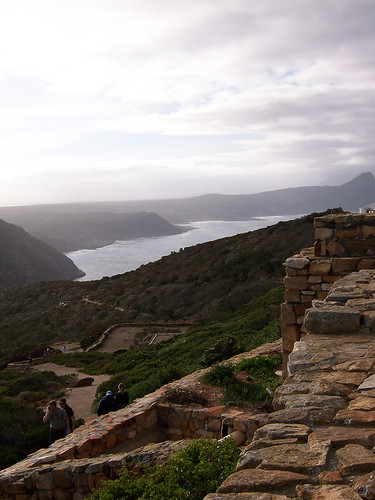 Quick Cape Town Fact: It was the Portuguese explorer Bartolomeu Dias who became the first European to set eyes on what is now Cape Town after he rounded the Cape by ship in the late 1400s.