MyPR: Suspect’s luck runs out due to the tenacity of Beagle Watch Officers:

A suspect recently discovered the hard way that the Beagle Watch Response team is more tenacious than the proverbial Terrier.

On a night patrol in the Hyde Park area, Beagle Watch Response Officer, Prince Mathebula, spotted a man running up Jan Smuts Avenue. The Officer gave chase and caught up with the suspect, who indicated he had been planning a break-in at a nearby tattoo parlour. With no evidence of a break-in or any stolen goods in his possession, the Beagle Watch Officer had to release the man, but not before first taking a snapshot…

The next morning, a clothing shop owner in the area reported a burglary. While not being linked to an armed response company, the shop owner did have CCTV footage which showed the same suspect had been in the shop the night before. The suspect had fled the scene when he heard Officer Mathebula approaching, but returned later for the loot. His version about the tattoo parlour turned out to be a ruse to distract the Officer.

Exactly a week later, Beagle Watch Officer Mathebula and his two colleagues came across the same suspect while on duty in Parkhurst. He immediately alerted his Operations Manager, Sonnyboy Masuku (who had been made aware of the case a week earlier and had shared the suspect’s photo with his team).

Together with Beagle Watch Officers Dumisani Nxumalo and Ernest Mudau, Officer Mathebula got his own back and apprehended the suspect.

The suspect confessed to the burglary of the clothing store and agreed to take Sonnyboy to the person who had bought the stolen clothing from him.

Sonnyboy called the owner of the clothing store to meet him there and they were able to identify several high value items of clothing.

The accomplice admitted to buying the stolen clothing and was apprehended as well.

A case of possession of stolen property was opened at Linden SAPS, while the thief was taken back to the clothing store, where he was arrested by the Parkview SAPS.

Video: Suspect’s luck runs out due to the tenacity of Beagle Watch Officers

More Info on Suspect’s luck runs out due to the tenacity of Beagle Watch Officers here: http://www.beaglewatch.co.za
Twitter:
Facebook:

Previous: Operating hours extended for IDs
Next: Archer in doubt for Cape Town


A Cape Town Langa tagged image from photographer – KimNowacki as published on Flickr.

Lizo “MC” Mgobozi, a Langa local who runs a walking tour of his hometown 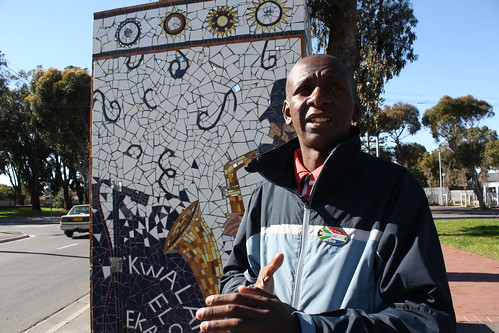